A Collection of American Glass Salts 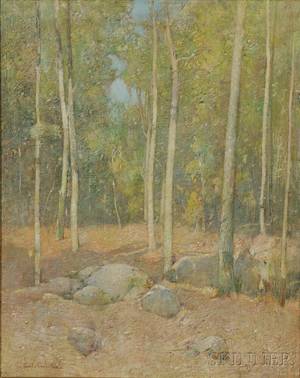 Emil Carlsen (Danish/American, 1853-1932) Early October , alternately titled Wood Interior Signed "Emil. Carlsen." l.l., inscribed, dated, and signed "Painted at Ogunquit/ Early October 1919./Emil. Carlsen./February 8th 1923" on the reverse, identified on labels from William Macbeth, New York, on the back of the frame and The Cooley Gallery, Old Lyme, Connecticut, on the frame backing. Oil on canvas, 20 1/4 x 16 in. (51.5 x 40.5 cm), in a period frame. Condition: Stable craquelure. Provenance: Descended within a Massachusetts family. N.B. Still life and impressionist landscape painter Emil Carlsen was born in Copenhagen, Denmark, and first studied architecture at the Danish Royal Academy. At the age of nineteen, he left Denmark for the United States, working as an architectural draftsman and assistant to the Danish marine painter Laurits B. Holst in Chicago. In 1875, he traveled to Paris to paint and study, immersing himself in the still life paintings of Jean Baptiste Siméon Chardin (1699-1779) which would greatly inspire his own work. Back in the U.S. he lived in New York and Boston, befriending fellow painters such as John Francis Murphy and Childe Hassam, linking him to some of the best known American Impressionists. From 1884 to 1886, Carlsen returned to Paris, where his palette lightened. In 1887 he was called to direct the School of Design in San Francisco, where he shared a studio with Arthur Matthews. In the end Carlsen was not happy in California, noting a