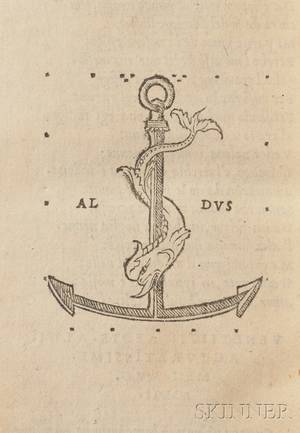 Dante Alighieri (1265-1321) Le Terze Rime . Venice: Aldus Manutius, 1502. Octavo, first Aldine edition, complete, including the blank between the Inferno and Purgatorio, the first appearance of Aldus's anchor device used on H4 verso; with the typographical error: Alaghieri on a1 verso; old manuscript numbers visible at top outside corners of leaves, in a blue morocco Riviere binding, with the anchor and dolphin on both boards, the front board re-hinged, a.e.g.; presentation inscription from the British poet and novelist Stephen Spender (1909-1995) and his wife Natasha Litvin (1919-2010) to American poet and Harvard professor, Theodore Spencer (1902-1949) on ffep; 6 x 3 3/4 in. An important milestone in the history of printing: the first portable Dante, and the first use of Aldus's famous trademark.